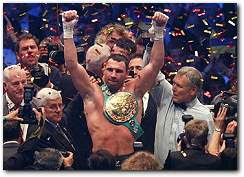 A heavy favorite, Klitschko had to work harder than expected against a determined challenger. Klitschko kept Sosnowski on the outside in round 1. Sosnowski landed a few shots in round three. Another workmanlike round for Klitschko in the fourth. Klitschko began to open up in the fifth punishing Sosnowski.

Klitschko then had his best round of the fight so far in the ninth, landing numerous hard shots. Klitschko came out for the kill in the tenth, finally sending Sosnowski to the deck. Referee Jay Nady immediately waved it off saving the glassy-eyed challenger from further abuse. Time was 2:20. It was Klitschko’s fourth successful title defense.

World WBC heavyweight champion Vitali Klitschko picked up the 40th win and 38th knock-out of his career with a tenth-round victory over challenger Albert Sosnowski.